Chinese brand Realme is widely popular for its affordable range of smartphones in India. The company has also leaped into the home industry with the launch of a smart TV last year. Over again, they have come up with their first 4K smart TV in India. The new TV has upgraded display features to provide a feeling of home cinema.

The company has announced two sizes of the TV: 43-inch and 50-inch, both with nearly identical features and specifications. Each Realme smart UHD 4K TV is packed with advanced features including voice control and android OS. We have briefly enlisted all the important features below:

Just like most of the competitors, the Realme 4K smart TV is also made from sturdy plastic. The black finish makes it look modern along with the matching stand. It has a bezel-less display that looks sleek and stylish. The top and side have thin bezels while there is a slightly bigger bezel in the bottom. It has 2.6mm ultra thin bezel and a 97.2% screen-to-body ratio.

The 4K UHD is powered by MediaTek Processor which is supported by ARM Cortex A53 CPU and Mali G52 GPU for a cinematic picture quality. Compared to the previous versions, this TV has a bigger 2GB RAM and 16GB large storage.

The TV supports up to 1.07 billion colors with a color gamut of up to 83% NTSC and 90% DCI-P3 for true-to-life colors. The Realme 4K smart TV is powered by Dolby Vision HDR imaging to deliver cinematic picture quality. Realme’s Chroma Boost Picture Engine further enhances the overall picture quality by improving the brightness, contrast and color.

With TÜV Rheinland Low Blue Light Certification, the TV makes less strain to eyes when watching it for longer periods of time. There are also seven preset display modes.

The Realme 4K Smart TV has four 24W speakers with support for Dolby Atmos and DTS Surround Sound to provide an immersive three-dimensional sound experience with supported content. It will heighten up the home cinema experience.

The 43-inch variant of the Realme 4K Smart TV is priced at Rs. 27,999. It will be available from 4 June at 12 PM via Realme’s official online store and Flipkart.

Check out quick review of the Realme 4K Smart TV in the video below: 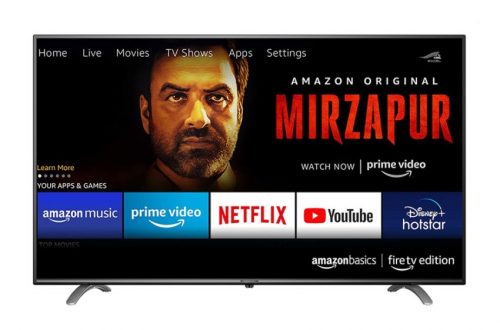